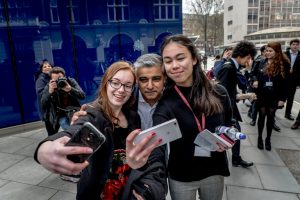 LONDON — The son of a London bus driver, Sadiq Khan has had a remarkable rise into the upper echelons of British politics. He grew up with seven siblings in a three-bedroom home in public housing and attended state schools before becoming a human rights lawyer and then a senior government minister.